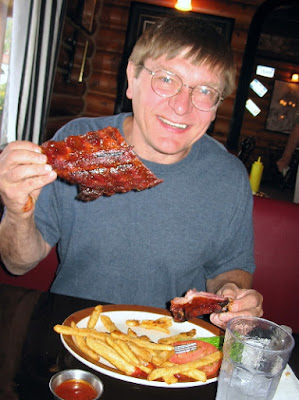 Every time Tom sees these pictures he salivates and says, "Those were the best ribs I've ever had IN MY LIFE!!" And he knows ribs. We found these in Jackson, Wyoming, in September of 2005. They were smoked, then barbecued. I had a taste. He's right. Delicious! 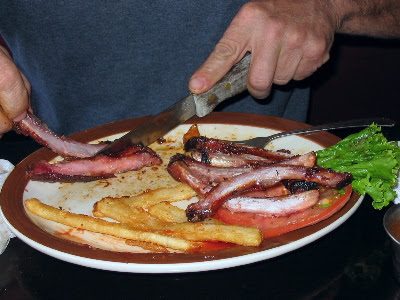 We discussed mailing the bones home for Sammy, our pup, who would have devoured them in giant slurps, but quickly concluded that would be silly.

I'm going to be away from the computer for several days, in case you wonder what's going on. I look forward to catching up when I get back! Have a TERRIFIC weekend, all!
Posted by Cherie at 2:49 PM

I wish I was in Jackson Wyoming now. I'm hungry just looking at those ribs! The fries look good too.

My Dad smokes his ribs first too. DELICIOUS! Only he uses country style ribs, rather than spare ribs.

You are lucky that your very own dad can make yummy ribs, tshs!!

Ashley, I wish we were in Jackson with you! ;-)