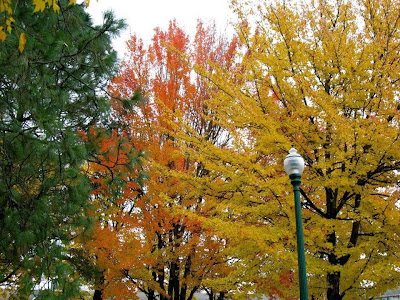 Exciting history has occurred in this autumnal month including. . .

The Mayflower Compact was signed in 1620.


Thanksgiving was first celebrated as a national holiday in 1789.

1805 marked the first Pacific Ocean sighting by Lewis and Clark.

FDR became the first U.S. President to broadcast in a foreign language (French) in 1942.

Howard Hughes' flying boat the "Spruce Goose' made its one and only flight in 1947.

Carl B. Stokes was elected the first black mayor of a major city (Cleveland, Ohio) in 1967.

And in 1998 Vincent van Gogh's Portrait of the Artist Without Beard sold at auction for $71.5 million USD.

Red, yellow, orange, and some remaining green leaves dot November's sky and soil. Soon they'll be piled up, burned, composted, scooped up into big trucks, or left to fertilize their mother trees. All in season, in order, life as it should be.

The Big Holidays tend to overwhelm November and December, but if we play our cards right we can find simplicity quietly pushes back any unwelcome pressure. Thoughtful choices create space for contemplation, observation, and deeply felt expressions of love which can't be bought or wrapped or plugged into a socket. Yes, the beauty of November awaits those with eyes to see and hearts that instinctively sense the slower drum beat of a more natural life, a spiritual attitude, a mindful connection to the beauty of a slower season, if we but choose to turn ourselves attentively toward its call.

November First. An offering to participate in a sweet-tempered melding of sorts. An invitation to relax, to replace energy happily spent in spring and summer, to take determinative steps toward refining and improving who we are as Children of God.

Sounds fabulous to me.
Posted by Cherie at 10:53 AM 5 comments: Links to this post