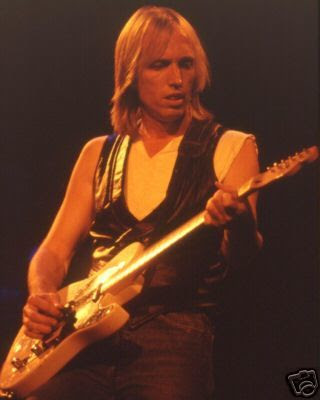 At 55 years old Tom Petty is in no way slowing down or growing cold. In fact, he rocked on for two hours with the Heartbreakers, no break, and sounded absolutely terrific! What a great show! We enjoyed singing our favorites with him. I think Cassie, Caroline, and I were part of only a handful in the audience who knew the words to the Traveling Wilbury's song, "Handle With Care" and we enjoyed singing along.

I don't imagine many of you reading this will even know what I'm talking about what with Tom Petty and the Heartbreakers, and the Traveling Wilbury's, but, we know, and we are happy to be able to add this concert to our growing list of wonderful musical expeditions.

Joe wore the shirt I bought him to wear on his England Trip, the one with the "Sell you computer, buy a guitar" and "Tom Petty Rocks" words on it. Well, a pretty blonde girl had one on, too, and she squealed, "OOOOH, we have the same shirt. Let's get a picture together!" So, Joe obligingly put his arm around her shoulders and smiled. Click! Her sister took a picture.

When people gather together with a common interest, well, you just never know what kind of fun you'll have!

Our ride home was rambunctious as we were all happy and excited.

Bed at 3 in the morning, was BLISS!

"Find Yourself or Maybe Lose Yourself While Your Free Spirit Flies....."

"Cool and Green and Shady"

Tom and Caroline relaxing at the ranch.

Ben, Cassie, and Caroline settling into the quiet rhythm of the water and the forest.

Snag in the Sky

"Could get a lot done if this thing could MOVE."

Sunset
Posted by Cherie at 1:20 PM No comments: Links to this post

Blogs go by the wayside during the recreational outdoorsy months of summer! Gardening, walking, playing....you know all about it.

We went to a Living History Event a few miles from our house this month. There were many interesting things to see and do, including many guns to view. Tom is showing Caroline and Cassie how to load this pistol.

My parents came up to celebrate the Fourth of July with us. What fun! We read the entire Declaration of Independence and afterwards pledged our allegiance to the flag of the United States of America (and in your mind are you repeating after me, finishing the pledge in that hurried slurred rendition we said every morning in school?) An interesting thing is that when we came to 'Under God', my dad kept going without reciting that part. We all looked at him, until it dawned on us that when he was a kid that phrase was not part of the pledge. Eisenhower added it, I believe. It was a great civics lesson for the kids. (Yes, I choked up. Always the patriot!)

Here is our backyard campfire/marshmallow roast. While we were sitting here there were fireworks going off all around. It was surreal!

Even with a casted broken arm Tom made a toasty bed of coals that roasted the marshmallows to a golden brown.

While we were out watching fireworks and enjoying the fire Sammy began to bark his baying beagle bark. He'd sniffed out a baby opossum, playing dead under the tomato plants in the vegetable garden! Well, the girls rescued it, with Tom's help, and here's a picture of the cute little thing. Cute while little, not so much when they grow up. We made sure the critter was all right, then released him back into the neighbor's blackberry brambles where the possums seem to hang out.

This little guy made a repeat performance a couple of weeks later, this time under the shed, at midnight. How do we know? You guessed it! Sammy......baaaooooooo! He let us know there was an intruder. Tom and Joe, newly home from their swing shift jobs, went out with Sammy and managed to help the little guy escape......again!

We decided to stay close to home this year, foregoing a formal 'vacation.' It's been pleasant to be foot loose and fancy free. No big house projects, no planning and packing. A surprising turn of events occured because of Tom's broken arm. He had to be put on light duty, so the powers that be at work decided this would be a good time for Tom to participate in some cross-training, which he's been asking to do for years.

One of the men working in Utilities is going on a month long vacation, so Tom is training for two weeks in that job, and will perform it for the month of August, while the guy is away. The cool thing is that he retains his exact same pay and benefits, PLUS he's on day shift instead of swing. He gets up early, goes to work, gets home in the mid-afternoon, and we play until bedtime!

Last night we commented that this year the vacation came to US!

It's amazing how just a change of pace, a break from the routine, can refresh a person.

We shall end our July with a Tom Petty concert up in Ridgefield, Washington.

August holds visits with dear friends, camping, swimming, and more hanging out as a family. I LOVE summer!

Hope yours is enjoyable in its own special way!

(I THOUGHT I said, fewer words! Is that even POSSIBLE with me????)

"Some of the things you have the hardest time parting with are the things you need the least." ~~ Bob Dylan
Posted by Cherie at 2:31 PM 1 comment: Links to this post