Of Courage and Helplessness

For the past several days Tom and I visited a favored aunt and uncle in Arizona and did some touring. While sitting at the rim of the Grand Canyon at sunset my cell phone rang. On the other end was a near hysterical Cassie. She and Caroline had taken Sammy our beagle on his daily stroll 'round the park when out of a PARKED CAR raged a pit bull straight for my beloved trio. The murderous dog attacked Sam, chomped on his head and neck trying to kill him.

Cassie, screaming at the dog and its owner while pulling Sam away, managed to keep the other dog from succeeding in crushing Sam's head, though its cruel jaws were around Sam's noggin attempting to get a good grip. The dog's dagger-teeth remained on Sam's head and neck, chomping, the two dogs shrieking and snarling primal dog noises, piercing fear into the hearts of my two precious girls. Up and down the street Cassie dragged Sam while the owner-woman cussed a blue streak at her dog unable to restrain him. Children and adults from the park tried to get the wild-eyed pit bull away from Sam. Poor Caroline stood horrified at the unfolding scene.

The attacking dog was restrained enough at one point for Sam to collapse onto the street, vomiting and in shock. Cassie, loving owner that she is, scooped him up and ran for home. Sam weighs 32 pounds! Caroline helped. They ran nearly the entire two blocks before they had to set Sam down. So heavy. He seemed fine, walked okay, marked this and that.

It was upon their arrival safe at home that Tom and I received their phone call while at the Grand Canyon. 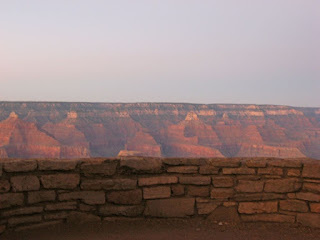 I nearly fell to pieces. So far away. No control. I felt like a bad parent but mostly I wanted to hold my children and assure them they would be okay and so would Sam. I sat there on the bench at the Canyon while Tom tried to find a parking space for the car - something we were in the process of doing when the girls called - and I wept. I stared at this gorgeous creation of God's while the lowering sun painted each strata and glowed on the peaks, and I muttered, "Yes, it's beautiful God. But it's a piece of crap compared to my children. I want to go home!"

We immediately changed our plane tickets from Thursday to the following afternoon, found lodging in the park, and knowing our friends and our son, Joe, were with the girls for the evening we decided to just sit at the Canyon and watch the stars come out, trying to enjoy the moment even as our hearts were with our kids. What else could we do?

Tom Crum tells a story about a little monk who is chased by a lion until he, the monk, is forced to jump over a cliff. On the way down he grabs a tiny tree, holding on for dear life. Six feet below his kicking feet is a bear, swiping giant paws and claws upward, drooling jaws ready to devour him when he falls. Lion above ready for his blood and bear below, the monk notices a huge, red, ripe strawberry growing out of the cliff within arm's reach. He looks at it and says delightedly, "Ah, a strawberry!" He plucks it and eats it, relishing the sweet, juicy flavor. The lion was the past, the bear the future, the peril very real. Still he enjoyed the strawberry fully in the moment.

Inside the majestic El Tovar lodge, in a wide, comfy, leather mission chair, huge old beams above, tall starry windows beside, I sat, a million miles away...worrying. Then, I remembered the strawberry. I pondered the parable for awhile. My tense, furrowed face eased a little. Just a little.

"Let's enjoy the strawberry, shall we, Tom?"

Hand in hand we wandered outside, still very upset and concerned, but determined to see and experience what was right before us. We were greeted with a herd of elk grazing on the front circle of lawn. Two bulls and eight cows and calves. We watched for a long time. They bugled now and then. Awesome. A family protecting one another. Beautiful.

We walked to the rim of the canyon, looked up at the stars, saw the Milky Way, pointed out familiar constellations, and marveled.

Knowing that Tom and I were completely dependent on friends, Joe, God, and the kindness of strangers to nurture our traumatized daughters in our stead caused a change in me, the one who feels the need to be in control at all times. Uncertain of what to label this change I rest in the fact that it is something good.

We made it home safe and sound, traveling back to Phoenix via scenic Oak Creek Canyon and Sedona. Our flights were on-time, smooth, the skies clear, the late night drive home from Portland easy. 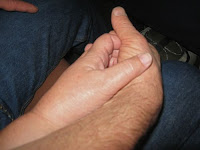 The hugs upon arrival were long and tight.

But I STILL hate pit bulls!! (And I'm not too fond of irresponsible owners, either!)

(The photo of the canyon is one I snapped from where I sat on the bench praying. It's what I was looking at when I said the canyon was crap. The second photo is Tom and my clasped hands as we flew home toward our very hearts.)
Posted by Cherie at 10:58 AM 10 comments: Links to this post 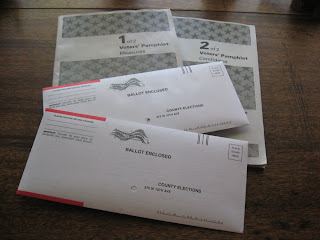 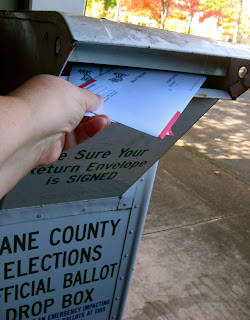 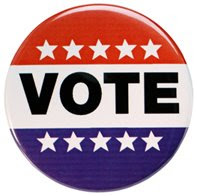 Sure hope you'll get out and vote this election, too!
Posted by Cherie at 1:57 PM 3 comments: Links to this post 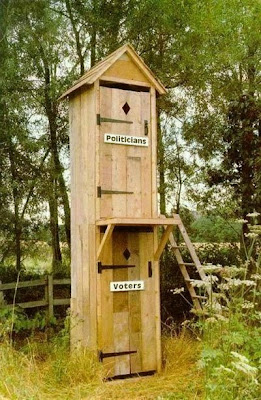 Posted by Cherie at 8:59 AM 8 comments: Links to this post 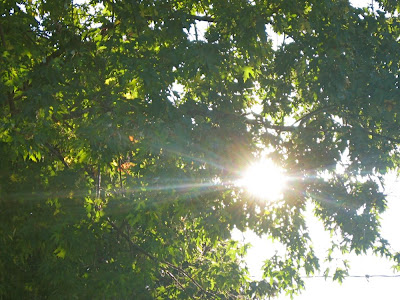 My favorite place in autumn - home. 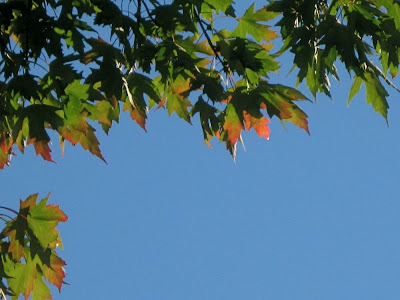 Looking up at beauty. 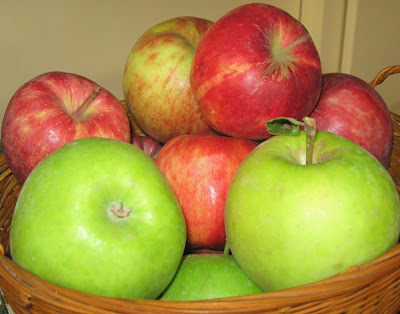 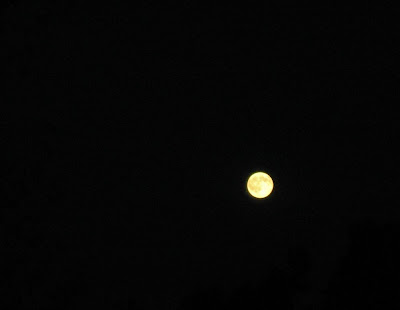 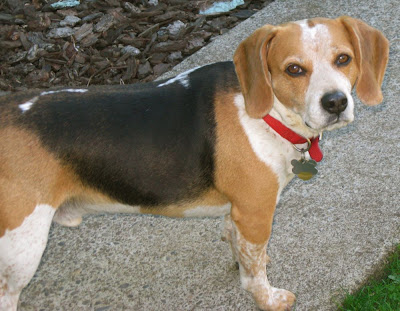 Laughing at the antics of our frisky fall pup.

Relishing my existence here in this home, my nest, comforted by these gifts of life.

(When the going gets tough the tough find solutions! Waste not, want not. See how I went bananas by clicking here!)
Posted by Cherie at 3:34 PM 7 comments: Links to this post 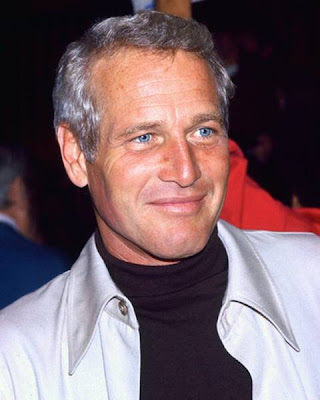 My SIL sent this to me.

Only women of a certain era will fully appreciate this.... True story. (If you don't understand this, tell your mother, she'll get it!)

A Michigan woman and her family were vacationing in a small New England town where Paul Newman and his family often visited.

One Sunday morning, the woman got up early to take a long walk. After a brisk five-mile hike, she decided to treat herself to a double-dip chocolate ice cream cone.

She hopped in the car, drove to the center of the village, and went straight to the combination bakery/ice cream parlor.

There was only one other patron in the store: Paul Newman, sitting at the counter having a doughnut and coffee.

The woman's heart skipped a beat as her eyes made contact with those famous baby-blue eyes.

The actor nodded graciously and the star-struck woman smiled demurely.

"Pull yourself together!" she chided herself."You're a happily married woman with three children; you're forty-five years old, not a teenager!"

The clerk filled her order and she took the double-dip chocolate ice cream cone in one hand and her change in the other. Then she went out the door, avoiding even a glance in Paul Newman's direction.

When she reached her car, she realized that she had a handful of change but her other hand was empty.

"Where's my ice cream cone? Did I leave it in the store?" Back into the shop she went, expecting to see the cone still in the clerk's hand or in a holder on the counter or something! No ice cream cone was in sight.

With that, she happened to look over at Paul Newman.

His face broke into his familiar, warm, friendly grin and he said to the woman, "You put it in your purse." 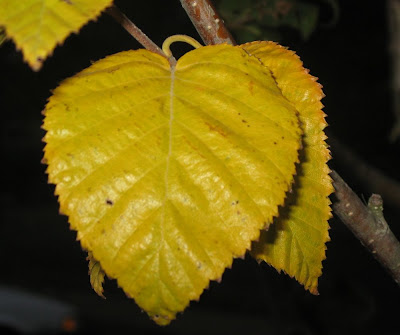 Ever since Tom and I camped at Glacier National Park in Montana under autumn aspen trees where we awakened each morning to heart-shaped silhouettes of golden leaves on our tent top, I've longed for trees that would grace our own land with such treasure.

Not aspen, but birch.

Simply fulfilling.
Posted by Cherie at 7:00 PM 8 comments: Links to this post

When the mood strikes it's best to get out of the way and let 'er rip!

The baking mood, that is.

Some crisp apples made their way into my kitchen just begging to be pied. Obligingly, I consented.

And made two pies. 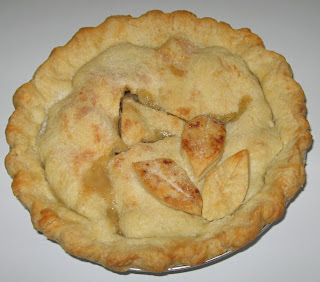 This one I took to Joe. He smiled.

The other apple pie is long gone, devoured, er, I mean humbly savored, in two sittings by the four of us.

That was on Saturday in between morning Mexican Hot Cocoa at Allann Bros. Coffee with my daughters, finding a good sale at Down to Earth, making another batch of vichyssoise, and watching the Ducks get slaughtered in football.

I found myself smiling all through the day, giggling at the rain sizzling on the roof, peeking out at black-clouded skies, clearly sensing inward warmth radiating out toward family and community, relieved that a two-week source of stress was over and with a happy ending. I stopped in my spirit and thanked God for the moments, for it was one of those really special, feel-good sort of days.

Sunday? Well, since you asked, the mood lingered and produced these little gems.
Posted by Cherie at 11:38 AM 7 comments: Links to this post