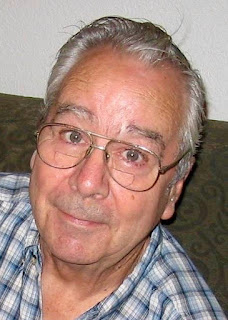 Donald Conway Blankenbaker, 89, passed away peacefully in his sleep due to age-related causes on December 17, 2016, in Rogue River, Oregon. He was born July 7, 1927 in Gentry, Arkansas to Arthur and Lennie Blankenbaker.

Don was raised during the Depression in the Dust Bowl of Oklahoma, migrating as a child with most of his family to Los Gatos, California, where a new life awaited them all. Don attended Los Gatos High School, served in the U.S. Navy, and worked his way from grocery store box boy at Safeway, to a Regional Manager for Lee Brothers, a large grocery store chain in the Bay Area. He married the love of his life, Carolyn Allen, in 1948, a marriage that lasted almost 67 years. The couple raised four children together, were founding members of Calvary Baptist Church in Los Gatos, and moved to Myrtle Creek, Oregon, in 1969 where Don worked with his brother Floyd as a salesman/broker for Village Realty.

Don was known for his ever-present sense of humor, deep Christian faith, steadfast work ethic, devotion to his family, and his unquenchable curiosity. He worked hard, provided well, and enjoyed life. He studied his Bible not out of duty, but because he wanted to know God who sent His Son, Jesus, to save him. He lived his life knowing that God reveals Himself not only through the Bible, but throughout life in everyday details and experiences. Don quietly shared his love for his Savior with anyone who was interested.

Moose-hunting in Canada, traveling to Israel, Alaska, Hawaii, and St. Thomas with Carolyn, caring for his home and property, and inviting people to enjoy his large swimming pool were some of Don's favorite activities. He also enjoyed helping at church, photography, puttering in his shop, beekeeping, playing pinochle, and hosting Bible studies. His favorite way to spend time, however, was playing with his children, grandchildren, and great-grandchildren.

He is survived by his two brothers, Gene Blankenbaker and Robert Blankenbaker, plus four children, Susan Alexander (Frank) of Othello, WA, Russell Blankenbaker (Hannah) of Gold Hill, OR, Cheryl Klusman (Thomas) of Springfield, OR, and Janet Perkins (Daniel) of Grants Pass, OR. Don is also survived by his grandchildren Joshua Blankenbaker, Betsy Whittaker, Hannah Green, Karen Drouhard, Benjamin Klusman, Sarah Cooke, Joseph Klusman, Andrew Perkins, Cassandra Klusman, and Caroline Klusman, plus 16 great-grandchildren, all of these people the love and passion of his life.

Posted by Cherie at 5:01 PM No comments: