Death, Where is Your Sting?

He was in His early thirties.

Just a kid, by today's standards.

Yet, Jesus lived a sinless life, died a gruesome death, and most importantly, awakened to eternal life. 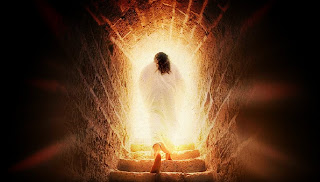 I imagine Jesus stirring to consciousness there on that cold slab. Remember, He was a young man, a human being like the rest of us. Have you ever awakened from a nightmare only to react like Ebenezer Scrooge, rejoicing to be alive? Jesus must have been rejoicing, too. His sacrifice was accepted by God! He conquered death! He knew full well what, in His obedience, He had done not only for Himself, but for those who believe in Him, those who are drawn to the Goodness of God.

The Prince of Peace sat up, and unwound the grave clothes from His body. Then, Jesus folded the small facial cloth and set it on the slab. An interesting note about that action, the folding of the facial cloth, is that in Hebrew custom, when a master was finished with his meal, he'd leave his napkin wadded up on his plate to signal his servant that he was finished eating and would be leaving the table. If the master left a folded napkin at his place, it meant he would return, so please, servant, leave his plate and silverware on the table. Was Jesus, in folding that piece of cloth, leaving a signal that He'd be returning for us? Perhaps. At last, the Messiah walked out of the dark tomb of a rich man into the fresh air of Jerusalem.

Think of it. Just think of His experience.

Death could not keep Him. He rose victorious over it. He is alive today.

Because He lives, we have the choice to follow Him to another Age, which we call Heaven. It is there He prepares a place for us so that where He is, we may be also. He waits for us, his younger brothers and sisters. It is glorious, and so humbling.

To you, gentle reader, I wish an Easter Observation full of love, joy, meaning, refreshment, and the realization that Easter marks the most Important Event in World History. The resurrection of Jesus.

I hope He has your attention...and your love.