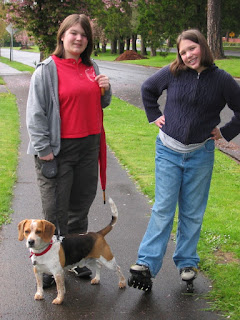 After a very long, complicated school session, Cassie, Caroline, and I decided to leash up Sammy and go for a stroll during a break in the rain storm yesterday afternoon. Caroline wanted to roller blade. Cassie didn't. Rather than have a squabble about it I suggested we just walk and roll.

So, we did, after we all chuckled at my incidental pun.

As I mentioned, it had rained and hailed all day, off and on. The skies were a beautiful mix of dark gray storm clouds, lighter gray clouds, and little patches of blue peeking out here and there. Everything was wet. It smelled like the first day of creation! (No, I'm not really THAT old!) The flowers wore droplets of rain as if jewel bedecked for a fancy ball. 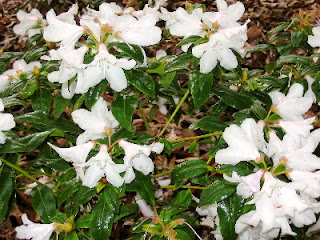 Our local Starbucks has adopted our neighbor-hood park, planting many flowering plants under the tall cedar trees. New loveliness appears every day. 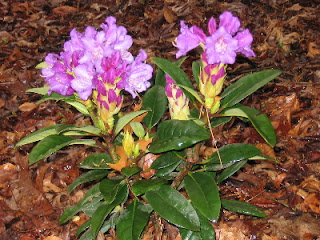 Though there is much grief and sadness in the world, beauty still abounds. The more ugliness is realized, the more beauty must be sought. Otherwise, like the victim of a mafia hit, cement boots of ugliness will weigh us down, pulling us under dark waters, until we are drowning in the bad, unable to breathe in what is still good, and lovely, and noble.

Shots rang out. People died. And the response? The response to the evil is the goodness in the self-sacrifice of a man for his students, the lovingkindness of parents who greeted their horrified, yet spared children with earnest, tight hugs, and the heartfelt expressions of compassion by friends and strangers for those whose lives abruptly ended and for their families whose shock remains deep. Let the response's brightness force the evil back into its oozing abode. As long as we live here on Earth, may we not allow evil to triumph, but make every effort to overcome evil with good.
Posted by Cherie at 12:44 PM

Hi Cherie. Nicely said and your photos are lovely.
As to the punning, I never call mine "incidental" because I pun without realizing it...sort of subconsciously the words bubble up.

Cherie, thanks for your words - you put it so well. Interestingly we've blogged around the same topic today. I admire your gift for gentle articulation.

So you bubble up puns, Lizza. That is a gift! How fun. Glad you like the photos.

Liz, it's quite topic, that's for sure. One we wish we didn't even know. I appreciate your kind words. Thanks.

I've been watching all the parent's possessively clutching their kids as they escort them off campus. I don't think I could ever let go of my child after they survived that horror!

Yes, tshs, we homeschool. I'm in my twentieth year. All four kids.

Ah, fresh air from your blog. Thanks for the reflections (and for being flexible with your daughters).

I saw lilac bushes in the hail today and thought of you... ;o)

UNBELIEVABLE, another thing we have in common! ;)
You've got me beat. We've only been at it for 2 years.

Haven't we had the most beautiful skies these past few days, Deanna! I keep going outside to look at them.

Also, I've been sniffing lilacs so much I'm surprised the tip of my nose isn't purple. Bliss!

tshs: It really IS amazing how much we have in common. Yeah, I've been at it awhile....

I've been thinking of you alot today. You....and bean sandwiches......and your wonderful friend, K. I hope you are feeling the comfort from all your friends.

Thanks Cherie! The funeral is today. I'm thankful that we've had the last 6 days to grieve. K wanted a joyful funeral. Hopefully we'll be able to pull that off today.
My blog friends have lightened my load considerably...THANK YOU!

BTW, that picture of Sam's beagle tail, alert in the air, made me giggle. I'll be doing a post on our beagle one of these days. ;)

Lovely words yet again, Cherie, and much needed by me this week. Thank you.

tshs: I'll be thinking of you today.

Normally Sam has his nose to the ground. I was lucky that just as I snapped this photo something caught his attention, thus the perky pose. Pretty funny.

Ann: Thanks. It's a fine thing to have words from my mind and fingers help another person. We are all in this together. You are welcome.

Amazingly perfect for me today, Cherie. My husband has been glued to the news channel and I'm afraid this event has gotten the better of me. Thanks for the perspective!

You're welcome, Annie. Those news channels CAN be spell-binding.