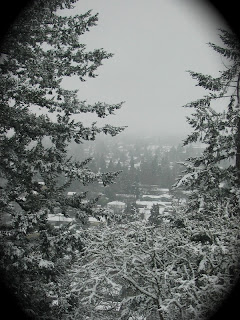 Christmas has come and gone leaving this heart warm and reflecting. I love Tom and the kids! They are wonderfully creative, gloriously unique. Amazing. Selected moments spent with each one have reminded me all over again just how special they are. The depth of my love for them increases. It's been a good season.

I've reconnected with my brother after months - years - of us being 'too busy' to communicate. He, like us, has had big projects lately. He thinks of me. I think of him. This week we took the time to share once again. As if we'd never been apart we picked up right where we left off. This, too, amazes me and gives me pause as I think of the nature of love. Long-lasting. Sweet. Strong.

Being knocked about by life seems to either grow mellow wisdom in a person, or it leaves them cold and hard. Lately I've been impressed with the many mellow-wise folks I am blessed to know. They inspire me, give me hope that I can age like a fine wine instead of a dried up lemon. The wisdom to listen to others, taking in what they have to communicate, no matter how haltingly the words may come. The wisdom to forgive - really forgive - in realization that we are all messed up, that we'll all say or do the wrong thing now and then. Let it go, move on, truly forgive. A twin to the wisdom of forgiveness is the allowance to change, to give each other space to grapple with life, and then to recognize resultant growth, rather than to mentally keep our fellow sojourners frozen in a time when they were, perhaps, not their best. Everyone deserves fresh consideration now and again.

Another learned wisdom, perhaps the hardest of all, is the wisdom to grow up. Not lose your youthful curiosity or fling your dreams away, no, but to become understanding, compassionate, wise from the experience of living, to reach out rather than defend, to realize consequences rather than smug self-gratification, to nourish the innate ability to be a blessing to the world rather than a curse.

I'm tempted to dismiss the hard, dried-lemon behavior of the one person this holiday season who left me perplexed, to just forget about it. And I will. I won't harbor ill feelings, but in the hope of learning something here I am pondering the reasons why. I can't fathom why a person of several decades would deliberately set about to hurt others, to disrupt Christmas with an attention grabbing, stormy display of immaturity, selfishness, and greed. Happily I am not hurt by it, just mystified, wondering why. The reasons will remain unknown, I have no doubt, but there is wisdom to glean in the missteps of another, if only to pause long enough to feel the weight of them, their unpleasantness, and then to make a personal determination to steer clear of such behavior myself. Let such unkindness not come from me. Heaven forbid! Yet, when I do falter, and I will, may I know immediate regret. Not only does this person show no remorse, but there seems to be a long-term plan in place for the destruction of others. If only this entangled soul was aware of the truth, which is so obvious to everyone else: while we remain unscathed, implosion is claiming this embittered heart. It's sad to watch.

Ah, but this emotionally enmeshed person is but one little blip on a distant shore of the Holiday scene, barely noticeable amidst the hours and days of happiness, togetherness, understanding, and a healthy family environment. No complaints!

We've even had a cleansing snow to blanket the holidays, cozying our winter scene, if only temporarily. 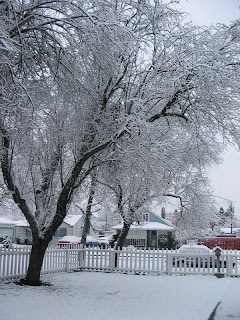 December 28th. Just a few days remain of 2007. It was a very good year. A busy year. A testing year. We began our home addition waaaay back in January when it was merely a bright idea. In February we began drawing up floor plans and securing financing. Many months of blur and here we are, about to insulate and sheet-rock. We should be able to move in before the onset of Spring, Lord willing.

What made 2007 a very good year? We learned that we, as a family of six, can undergo the stress of a long-term building project and come away close, respectful, even joyous. The strain only proves that our ties are strong rather than weak and easily frayed. A valuable insight.

2008 remains ahead, a dark mysterious place, to be lit one step at a time. Questions. Hopes. Dreams. Plans. They could all go out the window at any moment. So many variables, so much potential for celebration, and for sorrow.

A marker arrives in a few days, a milestone which speaks to those who will listen. It speaks of what has passed. It speaks strength and renewal for what is to come. Chin up. Courage. Anticipation. Let bygones be bygones. Give it your best shot. Great expectations. Steady, slow-burning hope.

Happy New Year. May you be one who ages like fine wine, and may the disturbers of the world wander far far from you and yours!

Winter Skoal!
Posted by Cherie at 6:30 AM

Ah, such grace-ful snow....lovely pictures. And the post itself so aptly describes a healthy and realistic anticipation of a new year. Thanks for the reflection!

What can one say to a beautiful mature post like that - from the heart - it is a sanctifying grace no less.
It's a hope, and without hope, we have nothing at all.
Happy and Peaceful New Year to you and yours.
Thank you. Cherie

this is what I needed to read today, now hopefully I can grow from your obvious mellow wisdom and snap out of the cold front that has invaded my heart. Thank you.

Thank you, Ann, and you are most entirely welcome!

You, Sean, are welcome as well. And thank you for more beautiful poetic words which lift my spirits and freshen my soul.

Summer, you, too, are welcome.

I don't know that I've reached the realm of the mellow-wise just yet, but I have my moments. ;)

Make friends with the cold fronts of life - they are some of life's best teachers.

Happy New Year to you and your lovely family, Summer!

The "dried up lemon types" always mystify me too. It's almost as if they don't enjoy happiness. I just wish that they'd stop sabotaging the happiness of others.

My parents always said that the true test of a marriage is if your marriage can weather a remodeling project. Looks like our marriages are built to last. ;)

Great post! Being mellow is so much easier than harboring ill feelings. Hope the new year brings you nothing but continued happiness.

And good wishes to you, too, Mike, for a New Year of wonderful new beginnings and the sustenance of all that you currently cherish. Thanks!

Wise words, Cherie. So glad you and your brother are reconnecting. A gift; may it continue. Blessings upon you and yours in the new year.

"May you be one who ages like fine wine, and may the disturbers of the world wander far far from you and yours!" I give your words back to you in thousands of wishes.

Too many times there are those that must swallow us up in their dysfunction only for us to find out later how difficult the digestion process was.

Hugs to you Cherie.

Thanks, Deanna. My brother and I have always gotten along famously, we just let too much time pass between visits. Too much nose-to-the-grindstone and all that. Fortunately we noticed and did something about it. He's a great guy! Blessings to you and yours, too, dear Deanna.

Sandy, you sweet sweet woman! I heartily receive your thousands of wishes with a grin and a happy heart!

I absolutely LOVE the your excellently put line about the difficult digestion process of those who swallow us up. Perfect! Genius! Tom and I were smiling and nodding in agreement.

Thanks for the hugs - feel mine in return?

Mike, I told my daughters about your 63.5 inches of snow for December alone and they joined me in being green with envy. I'll bet it's just gorgeous, and quiet, and clean, and cold, and refreshing. All the stuff that inspires! Happy Snowy New Year, Mike!

'...to be lit one step at a time.' Good perspective Cherie! Another inspiring post from you and your way with words. The snow is beautiful. Happy New Year to you and blessings for you and your family. I look forward to another year of being one of your faithful readers!

Happy New Year to you, too, Annie! You do my heart good!

Are your children just perpetually grinning? Your husband too?

No doubt about it.

I don't know about perpetually grinning, but there is a lot of smiling and laughing going on around here.

Happy New Year Cherie. Thanks for your thoughts shared here... I know my attitude has moved a little closer to the dried up lemon in some ways in 2007, and my goal is to start inching in the other direction, towards the mild, mellow, yellow. :-) I find your comments about keeping fellow sojourners frozen in a time when they weren't their best when they deserve fresh consideration now and again convicting, compelling and encouraging. Something to take with me into 2008!

Happy New Year to you, too, Cecily. Your thoughtful, candid words do my heart good. Thank you so much for sharing with me.

I see a mellow-wise you in the future!