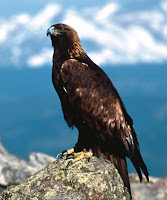 When I was 13 or so my brother brought home a John Denver album called Aerie. It had pictures of John on the front and back, with an eagle perched on a heavy leather glove on John's arm, while a round, orange, setting sun colored the scene sepia.

Birds of prey thrill nature-loving me, the way they seem so confident, powerful, graceful. They don't do all the flapping that a crow will do, and they don't seem unsteady and wobbly in flight the way vultures do. Grandeur and capable efficiency mark their movements. They perch with ease. They sore with speed and insouciance. A thing of awesome beauty it is to watch an eagle or osprey swoop upon a river or lake and with its massive talons pluck a fish right out of the water, then push hard against air with long, wide wings, and fly victoriously to its perch.

Naturally the photos on my brother's album garnered more than just a passing glance. The bait was set. I was hooked. I investigated.

After seeing and hearing that record album which showcased one of my favorite animal species, I made it a point to check out LPs the next time I went to the store. I found Rocky Mountain High. Here was that little, bespectacled, blonde guy again, jumping on rocks across a swift river this time, in hiking clothes. I bought the record. I adored the nature songs. I listened and sang, listened and sang every day after school.

That purchase led to the purchase, eventually, of every record John Denver made, but one. I bought many of the songbooks, too, and my mom bought me a guitar so I could learn to play the songs. Which I did. Not very well, but enough to play along, sing along, and feel a part of the music.

My guitar has been silent for quite a while, though carefully stored right here where I can keep an eye on it. Occasionally, when everyone is out of the house except me, I'll get it out, play a little, and remember. When I had little kids around it was hard to spend the solitary time I desired in playing, and besides, the kids were far more fascinating that my feeble guitar attempts. Gradually the guitar took a back seat to the all important, enjoyable, mommy-things which plopped down in the front seat of my life.

Imagine my delight when Cassie became interested in playing my 6-stringed instrument. I handed her my guitar how-to lesson books, and the guitar, along with my blessing. When she opened the case there was that intoxicating smell, that guitar and case smell which I am at a loss to describe. Starting at the beginning, and working her way through the books have given Cassie the satisfaction of learning and playing. Her excitement at each interval of success makes me smile. A much better player than I am, is she. 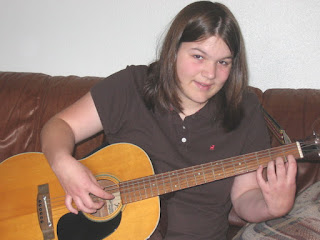 My old friend and my young daughter have found one another. 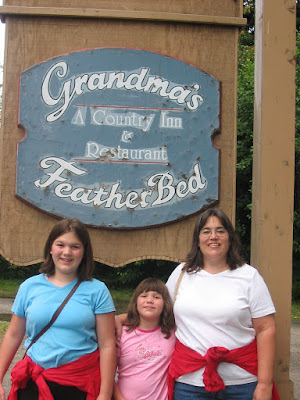 Update: This is for Liz and her 13 year old son, JD fans through and through! This is Cassie, Caroline, and me, in Juneau, Alaska, 2004. I HAD to have our picture taken by this sign, for JD sake. We ate at the restaurant there and had the best fish ever, delicious fresh homemade bread, and everything else was scrumptious. Our waiter was hilarious, had us laughing the whole time. Good memories!

"It would hold 8 kids and four hound dogs and the piggy we stole from the shed.
Didn't get much sleep, but we had a lot of fun on Grandma's Feather Bed!"
Posted by Cherie at 11:09 AM

Have you bought a "Bob Dylan Songbook" for her yet??

It's on the list of things she wants to use her allowance for.

You understand she doesn't play any John Denver. She doesn't even LIKE JD. (I don't even listen to him anymore.)

She's just playing folk songs and going through lessons. It's only been a little more than a year that since I began my love affair of Dylan, thus, sadly, no Dylan songbooks to bring forth from my childhood.

I shall tell her you asked, and I'll bet she'll want me to ride up to the music store with her ASAP!

"I am the eagle,
I live in high country,
In rocky cathedrals that reach to the skyyyyyy!"
You're all lucky that you can't hear me singing right now!
I bought Rocky Mountain High first, then Aerie, after seeing JD's documentary on the subject. Yet another thing we have in common!

My friend's and I went to a JD concert when we were 17. It was the highlight of our short lives!

My kids don't like him either, but I still torture them with Rocky Mountain High, whenever we vacation in the mountains. ;)

Not being able to play one single note on any instrument, I have always envied people who can play and especially those who can sing.

Oh, tshs, I almost put those lyrics in this post!!!

I was singing them as I wrote.......sisters, I say, separated at birth, and with different mothers!

I went to not one, but two of his concerts. Tom went to them both with me, once before we were married, once after. So absolutely terrific! Such fun.

And I sing RMH every time we visit the Rockies. In fact, when Cassie as very very little, she used to sing, Ugga Bugga Hiiiiigh!

Moose B. I am delighted to hear that you loved JD! And yes, waaay too soon. Took me a long time to get over it, such a shock. Thankfully, we knew of him, and his music lives on!

Cherie,
I love John Denver - listen to him loads still and my 13 year old son is with me - his fav is grandma's feather bed. Always wanted to see him in concert but didn't get the opportunity. Good taste, girlfriend

I sure hope you sang it better than I did, my sister! *giggle*

Liz - not surprised you love JD. After writing up this post, and reading all these comments, I got out my JD music - sweet sweet surrender! I'm going to post a picture here now, for your son. Hope he likes it!

tshs, I doubt I did sing it better, sis! We must get together one day and howl together! Nothing sounds sweeter than someone who sings as lousy as yourself! :-)

Ah, John Denver (such a crush I had once!), guitar playing, eagles. It brings bittersweet memories, and I thank you for them.

Very cool story, but have YOU thought about taking up the guitar again? I hope you do.

And it's nice to see a picture of you, so I can put a face to blog.

You're welcome. Good day, huh. I never had a cruch on JD, just thought of him as an older brother. My crushes landed elsewhere......

WC - as a matter of fact, yeah, now that Cassie is so interested, I have picked up my old friend, finding that my now non-callused fingers sort of remember. Nice! There are a few other photos of me on this blog somewhere - I think in the post about going to the beach in April "Sand Surf and Serenity". Thanks, WC.

I played guitar too, only because I had my radio taken away when I would leave it on all night and keep my mother up. So I took to guitar. I wasn't so good, but I loved my own music. A good sign that I was not very good.

Anyway, my youngest son decided he would do the same. And he adopted my guitar until he learned there were electric ones; that changed everything.

You brought back a sweet memory for me; it was fun to read about your experience. I agree with Wondering, you should take it up again yourself. Also love the picture of you, good to see a face to that wonderful heart of yours.

Oh, Sandy, I'm so tickled that a sweet memory rose up for you. Summer is a good time for such things, huh. And you played guitar, too. Sweet!

My youngest son, like yours, tried out my guitar for a very short period of time, and went electric as well. Still plays the bass for fun with his friends now and then.

Ruaridh and I both say thanks, cherie :)

Most welcome, Liz and Ruaridh!