We're not snowed in, we're frozen in. Powdery snow, slippery ice. The four of us decided to chance a walk around the neighborhood. The girls held hands. I held Tom's arm. Slip slidin' away! Only four other houses shoveled their sidewalks so we had ice to walk on most of the way. Thick ice, especially on the streets.

With temperatures finally rising above freezing we are seeing thaw, but wait! We're approaching the freezing mark again!

So this is cabin fever? A tiny dose. Yes, yes we are wimps. It's all so unusual, to have thick, slippery ice for ground. Driving on frozen freeways at 30 m.p.h. is interesting. Snailing around town is especially harrowing when insane people drive inadequate cars (or is it the drivers who are inadequate?!?) while jabbering on cell phones - or smoking long cigarettes, dahling! - sliding menacingly toward others who are trying their best to keep it going forward, unsmashed. Do NOT step on the brake.

To assuage cabin fever we look for signs of life... 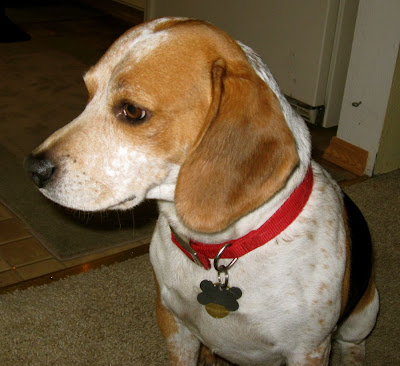 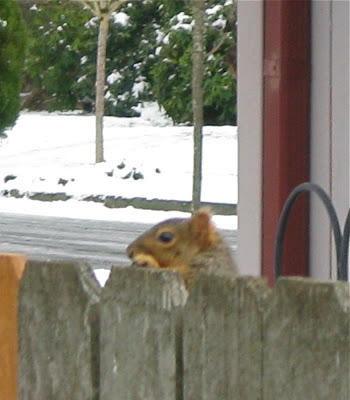 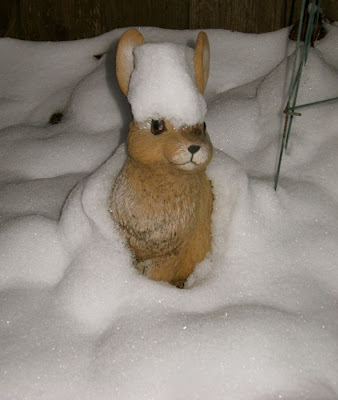 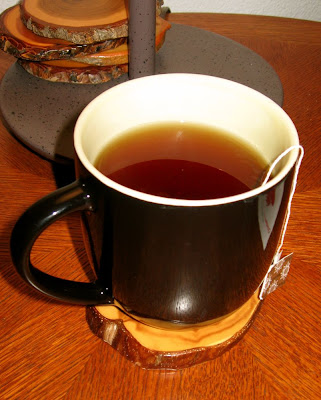 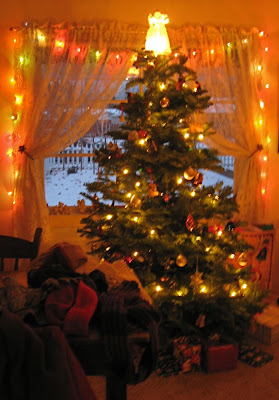 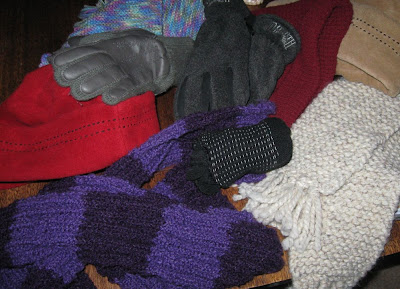 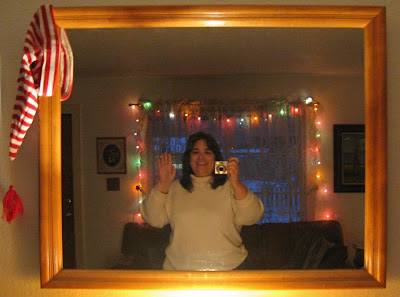 And had a little fun.

Merry Christmas from me to you!
Posted by Cherie at 9:56 PM

Fun! Your pretty home; happy pup. I'm glad we've all made it through the iciness so far. Now I've got the cold, snifff. Time to snuggle in and watch Castaway. May you stay as warm and comfy as you look. :o)

Your tree is BEAUTIFUL!!

Sorry, but true cabin fever doesn't start hitting until at least February. Right now it's just fun to snuggle down in a Christmasy home!

we are feeling a bit iced in too and I know the need to find the cheer and I think I found it right here on your page! That tree is so beautiful and right now I must run and make a cup of tea...thanks for sharing your cheer :)

Deanna: So sorry to hear you're coming down with a cold. Mine won and has had dominion over me all week. Feeling a little perkier today after resting all day yesterday. Feeling like I may actually mend in time! Hurrah. (My mom, by the way, had to make an emergency trip to the doctor. "She's just days away from pneumonia," he said. Good grief. She's on meds now and is being cared for. See why I hate it when sick people come a'callin' on holidays! Grrr.)

Thanks, Tshs, for the encouraging words that this isn't in fact cabin fever - I told you we are wimps. This is proof. :D Our first snow melted yesterday only to leave room for a fresh dumping last evening. This new batch is wetter snow, snowball-making stuff! It's not as cold so hopefully we'll get to go for an easier walk today. In the white stuff. Got to enjoy it while we can as we know this may be all the snow we get until next winter. Such are the seasons in western Oregon.

Summer: Makes me happy to know that I cheered you. These good things must be shared, right? Bet your tea was every bit as satisfying as was mine. You're welcome! Do you have snow and ice this morning? I'm wondering if you have more ice today than we do here as I think this latest storm blasted you guys harder.

Beautiful tree! It's fun to see photos of what others have going on in their homes.

I have a cold now. Sniff.

Thanks, Gretchen! I liked looking at your pretty decorations and doings, too.

I'm so sorry to hear that you have a cold, too. You, me, and Deanna - cough cough sniff sniff hack hack.

Cherie, what fun, I heard about your storm! Fortunately for you, you'll have breaks to enjoy both nice weather and snow.

I love that picture at the end!

Incase I don't get the chance, have a wonderful Christmas. Thank you for sharing all your wonderful thoughts with us this year, your creative spirit is wonderful!

Cherie.You & Yours Have A Beautiful Christmas X

Sandy, yes, we are enjoying warmer, quieter weather today here in the south valley while up north where my son lives they are being walloped again with snow and ice. I am always surprised when I am happy to see gray and rain - well, for awhile. ;)

Wonderful Christmas to you, too, Sandy!!

Tony, a Beautiful Christmas to you and yours as well! X

Merry Christmas Cherie, Tom and your family! May you enjoy your cosie days together.

And Merry Christmas to you and Frank, Cecily!

Just the right setting for the season. Not sure about cabin fever time though. We don't start feeling cooped up until about the last big snow in mid to late April. Super photos!!

Not unusual here to have thick slippery ice for ground, and have it from November till March. Temperatures go from just below to an average of 6 to 10, sometimes 20/25/35
Put the coffee on, a full pot. I like it strong and black (with lots of cream and sugar- don't tell anyone)
Happy New Year

Mike - wow, cabin fever in April. I'm elbow deep in garden prep by then. We laugh now that we felt what we thought was cabin fever after a week of ice. Ah, but how are hearty as withstanding rain rain rain...sorta. Thanks, Mike!

MM: I won't tell - promise! We've been going through pots of pots of tea and coffee this winter. Like cattle circled around the manger for food are the people young and old around the pot. You are a tough dude to live where you do - perhaps it just takes time to get used to such things, eh?

Tony, you gave me the jump start I needed to birth a New Year's post. I wish you the best 2009, too, and send my kindest regards to you and yours. Cheers!! (Oh, and Christmas here at home was peaceful and fun. Elsewhere, well, not so much....)