It may still be the oldest parade in Oregon but on Saturday it wasn't the coldest. The sun shone down 54 degrees. A glorious day for angels and elves to glow and scamper amidst the wide, tidy streets of Springfield. 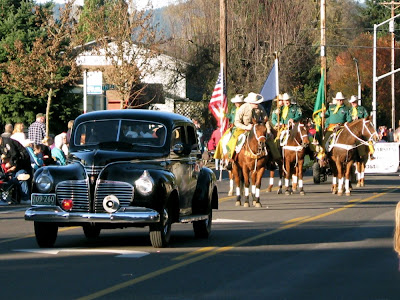 The Grand Marshal rode in vintage style at the beginning of the Christmas Parade. 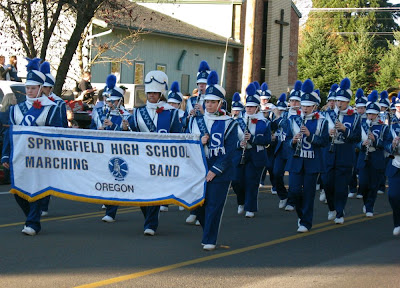 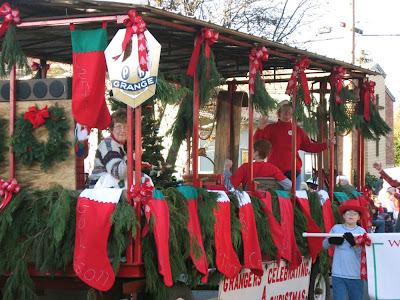 The Grange displayed a festive float. 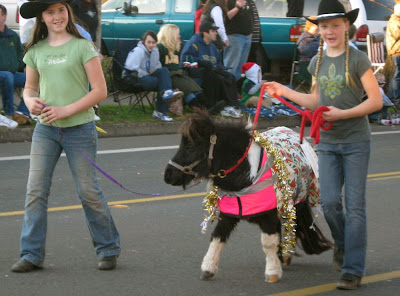 While these little girls bubbled up joy at seeing Sam, our beagle, Tom and I adored their little pony. 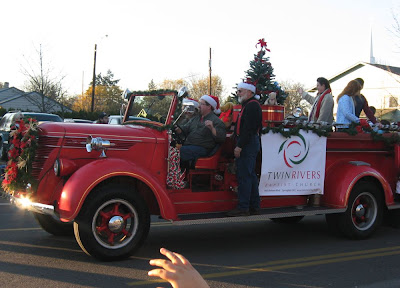 I love the gleam on the front fender of this fire truck ridden by members of Twin Rivers Baptist Church. 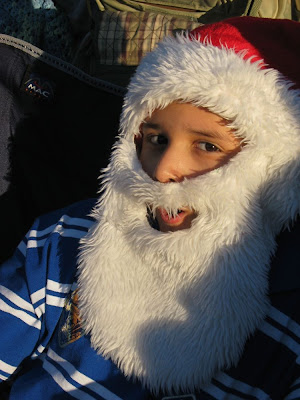 Standing behind this little kid and his two friends gave us lots of laughs. The parade participants pointed at him and said, "I like your beard!" or "I've been good, Santa!" to which he robustly answered, "Your wish has been granted!" This photo shows him in mid-ho ho ho! 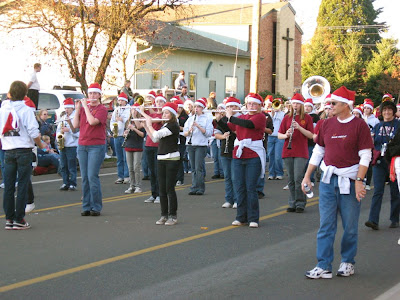 Can't have too many bands playing Christmas music on a sunny Saturday in Springfield. 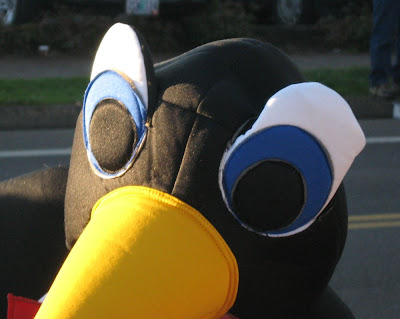 Penguins and Christmas - but this one had trouble finding an ice floe! 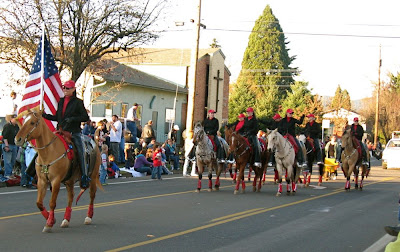 These horses remind me of a parade in another town in another decade. The horse was a funky looking breed made all the funkier because of odd, shiny, feathery bling attached to every buckle and loop and braided into its mane and tail. It's rider, an immense woman weighing well over 300 lbs., was wearing as much ridiculously gaudy decoration as the horse. When I gasped, "What is THAT?!" Tom, his focus not on the decor but the rider, calmly responded, "A strong horse." Yep. Yep. 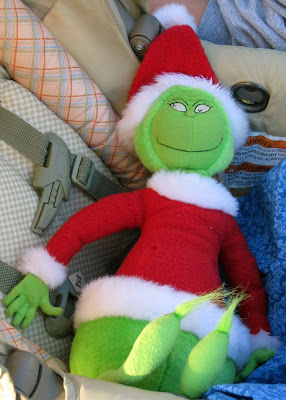 The Grinch in a baby stroller. Wonder if that kid's gonna need therapy when he gets older? Wonder if he'll remember why? 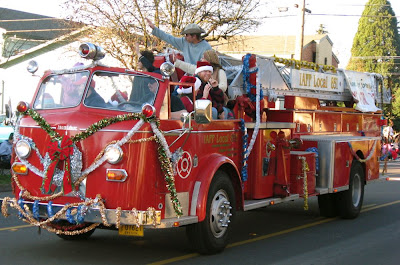 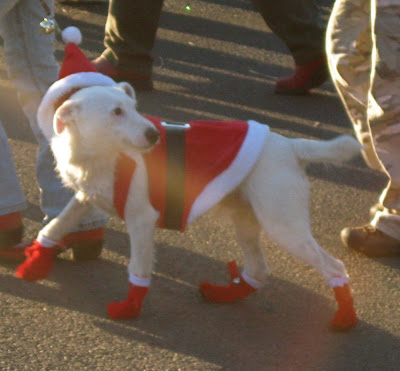 Sammy was in good company as canines were well represented in the parade, beginning with this Santa dog who I thought looked embarrassed, peering over his shoulder to make sure his doggie-friends didn't see him in that get-up. 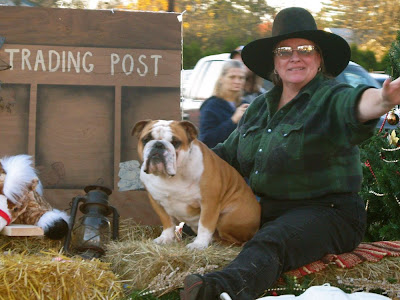 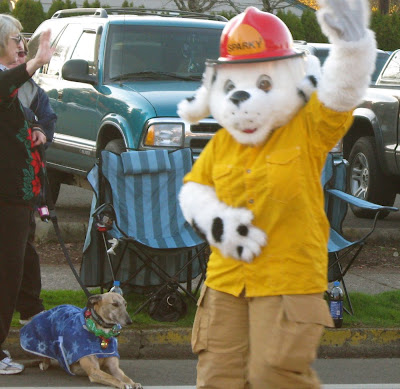 Sparky!! (Notice the regal looking greyhound watching the parade from the curb. He sat like that the entire time. When Sam barked at him now and then the dog just looked over at him. I swear he raised his eyebrows and yawned.) 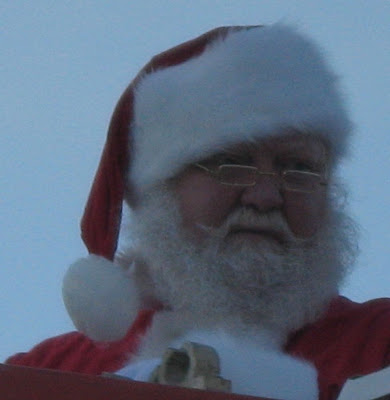 And on the last big evergreen bough and red-bow strewn utility truck, leaning over the rim of the wide bucket, high, high above the onlookers, was the Jolly Old Elf himself!

Tom and I received a decent dose of Christmas - and community - Spirit as we observed and cheered this Christmas Parade. The sense of community experienced while chatting with strangers on the street, and seeing friends along the way warms a winter heart and gives evidence that 'things' are not as bad as they seem.

Far away from the media hype-and-scare is the soul of our country. It steadily glows in schools, in churches, in community organizations, and small businesses. It thrives in neighborhoods. It dwells safely within loving family homes. It's a power that puts up with a lot but, should the need ever arise, will boldly shine forth from its nurturing nests to illuminate the faces of the men, women, and children who are this country, who care, and who hold dear the self-evident truths.

Nothing like a Christmas Parade to reveal this best in us.
Posted by Cherie at 10:22 AM

Your conclusion is a wonderful message of fact and hope, thank you. I gotta say though, that picture of "dogs and owners" is precious.

Thanks, Sandy! I think it's so cute how some dogs and their owners resemble one another. Don't know why that is, but it really is precious, as you said.

Thats wonderful.I Wish we had Winter Parades Like This In England !

Glad you liked the post, Tony. They don't have winter parades in England? Maybe someday...

That parade may be the oldest, but it's definitely not the coldest. Our Christmas parade is always the day after Thanksgiving. There have been several years when the temp has been -20F.

Tshs: Oldest and Coldest in Oregon. I don't think there are many Christmas parades here in our fair state - that's why this one is so fun. I'm sure there are older and colder parades in other states, yours included. Takes hearty people to bundle up and participate, not to mention stand on a cold sidewalk and watch.

What a story your pictures tell. Can't believe there's a place without snow all over it these days.

I see people have no coats on - nice cimate! Love the fire engine - so Christmasy - well, the whole parade was of course - thanks for taking us with you! It sure puts one "in the mood" doesn't it!

BJ: Believe it or not, snow around here is a special treat. We're supposed to get a bit of it in the coming days. You should hear everyone - you'd think it was a blizzard or something; people stocking up on groceries, chaining up tires. I mean really, it won't las long and is easy to drive in. You snow hardened people would laugh to see us. Too funny.

Glad you liked the parade pictures, Gardenia. It really does put one in the Christmas mood. Tomorrow we're putting up our tree. That'll push us clear and certainly into the oozy center of Holiday glee.

Have fun with your tree!