Cassie, Caroline, and I went for a long bike ride on Saturday. On the park's walkway we noticed chalk markings for a race that had taken place. There were mileage notes, directional notes, and this note... 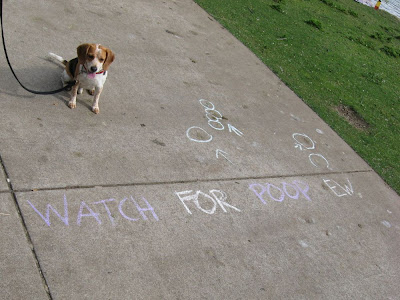 I don't know why but there were five times as many geese pecking the grass at the park as usual. Poop was everywhere - some of it carefully circled for runners to avoid. 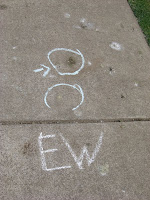 Rather than track our tires through it we just turned around and peddled the other way.

Tom and Sammy joined us as we walked back later to take a picture.

So glad it's still too cold for them to stop here. They can mess up a place really fast.

Makes me laugh too! Maybe a little poop humor is good for us! God's gift to us humans, goose poop! Well, for today anyway.

How funny! Sometimes these little things are the most delightful!

You've got THAT right, Mike! I was shocked at how messy our usually tidy park was. Hopefully they're just passin' through.

Sandy, Yes, a good gift of poop humor is good for us now and again.

Gardenia, yep, little things, surprises, can be quite delightful.

I think I'll use the Watch For Poop warning as a metaphor for all of life. Doesn't hurt to be on the watch for poopishness all round - and avoid it if at all possible. :D

Thanks for these comments, friends!

LOL, you're just lucky that Sammy didn't eat the goose poop. Our old beagle would have. ;)

We used to camp at a place where the geese had taken over the swimming beach. It's pretty bad when you have to wear shoes to the beach!

I love these photos! Sammy looks so dignified, posing beside those "poopy" words.

Tshs: I hadn't even thought of Sammy making a snack out of the circled plops. Yes, it would be pretty bad to have to wear shoes at the beach. I love to see the V's of geese flying, but the poop of earth-bound geese I could do without. Was it St. Francis who said something like, I feed the birds and they thank me with their droppings? Thanks, St. Francis, but no thanks! ;)

Ann: He does look dignified, doesn't he. He pulled it off in spite of the poopishness. Such a pup!

Hahaha... that is funny! We had to watch closely in Europe - everyone seems to have dogs and they take them off the lead all the time, plus take them on buses and in shops and in all sorts of places you aren't allowed to take dogs in Australia!

Cecily, dog stuff is even harder to tolerate. Peew! Amazing that it's a problem in Europe. The things you learned! ;)

Sometimes it is the simple and beautiful things in life that will help to remind us of how wonderful life can be, and that it is still ok to laugh..I love this one. Thanks for sharing

Thanks, Stacey. You said it perfectly.