And So the Summer Begins 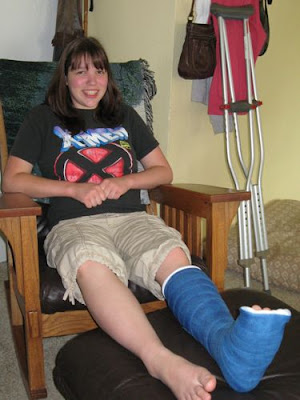 On Monday, Caroline played soccer with her team. Halfway through the game, as she maneuvered the ball toward the goal, turning abruptly on her foot, she heard a pop. "I think I just broke my foot," passed through her head, yet her feet kept pace. She made the goal.

And played the entire second half.

From the car's back seat on the way home she nonchalantly uttered, "By the way, I hurt my foot during soccer. I heard a pop. I suppose it could be broken." 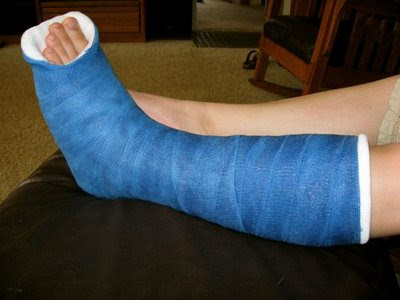 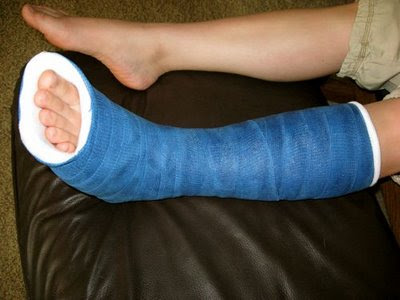 She was right. Two doctor's appointments later she now sports a bright blue cast and a grin. Is it the story-for-the-kids-and-grandchildren tale she now possesses which prompts the grin? The relief from the dreariness of the last two weeks of school? The attention? The absurdity of it all? A small movement breaks a metatarsal and thus merits a cast? Whatever the cause she has an inspiring sense of humor. What a trooper!

Today she's content - loves the cast-signing aspect - couldn't wait to get to Shakespeare class. And the cast is only for three weeks should it heal as expected. Afterwards she gets a removable immobilizing boot which will allow the stretching of her ankle now and then. 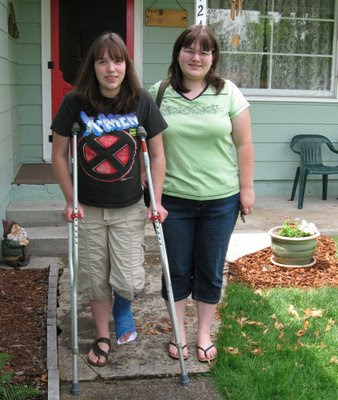 And so summer begins. On a strange, unexpected path.

We are no longer bored.

Be careful what you wish for.

What a trooper! Broken feet are painful - and she continued to play?! WOW.

I hope everything mends well!

I hope everything mends well, also!

Yeah, broken feet ARE painful! Yes, I played the rest of the game. I couldn't let my team down! And I stopped a couple of goals too!

P.S. Everyone in my Shakespeare class signed it!

Your are one strong girl, Carrie! That was heroic!

Was so sorry to read about the break - and so proud you were such a brave player. Wish our DBacks had some of your spunk. Hope we can get together soon. Love - AJ

No Doubt She Will Have To Put Up With Lots Of Wisecrackers asking what She ".....Will Do With Her Summer Break..........."
I hope She Mends Well + is now comfortable.

Tony: Seer, you. It's already happening, the wise-cracking, that is. In reality, though, because it's a small and stable break she will be out of the cast in only two weeks into her vacation and then the removable 'boot' for a couple more. She's comfortable now - loving being waited on though she did say yesterday, "I feel guilty asking for things." We quickly told her not to, she'd do the same for us, and has. We're a family - all in it together. Thanks, Tony!

What a BUMMER!! At least she'll be able to sit out in the sun and read a few good books.

Take it easy Carrie and do what the doctor says!

Oh, she'll get bored with that cast in the summer heat, count on it. It'll get old. Here are wishes for quick healing for your wounded warrior!

Well, I pray for a speedy recovery too! Caroline must have a high tolerance for pain!

Tshs: Yes, she's finding leisure is losing its charm already. But she is following doctor's orders to the letter. Wants it over with asap.

Gardenia: Thanks from the wounded warrior! We're hoping summer's heat holds off a little. We're having a gorgeous June so far - mid 70's - tolerable for sure and the forecast is for more of the same. That gets us through the first two weeks. The third week we shall have to see. Then the cast should come off. (Fingers and toes crossed.)

Sandy: She gets her pain tolerance from me, and my mom, and her mom.....a tough bunch of cookies!

What a pretty blue cast! I'd smile too! Until the pain meds wear off..... Actually the worst part is when you get an itch!!

mmmmm, nice cool plastercast i like the collor and you have cute sexy toes xoxoxo.