Vodka and a Storm

This morning Tom and I drove to a hilltop nursery twenty minutes from our home. While we left the colors of spring in the valley, we encountered snow on the ground at 1700 feet and, brrr, a much colder temperature. Zipping our coats we tramped around examining tall skinny birches.

At one o'clock, as we four enjoyed our Meatballs in Vodka Sauce by the dining room's picture window, we noticed snow falling. Snow. It fell on the cherry blossoms, the hyacinth, the daffodils, and the new baby lawn. Considerable wind dramatically swayed trees. A bluebird landed in the bird feeder. Instead of eating he perched, confounded by the snow landing on his wings and head. He shook his robust body and flew away.

Into the Trooper the girls, Sammy, and I hopped. Opportunity didn't have to knock twice before we'd open our attention to it. 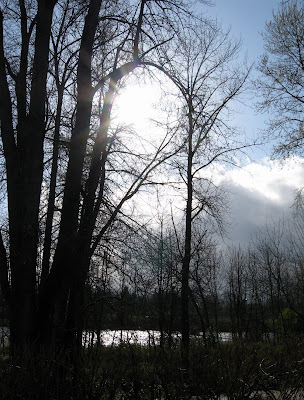 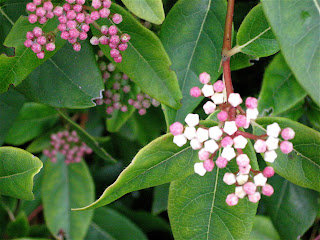 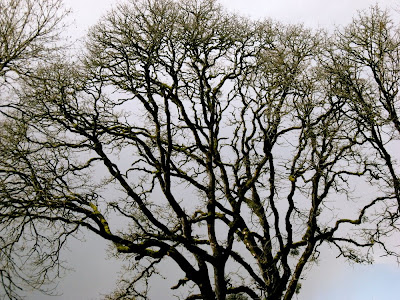 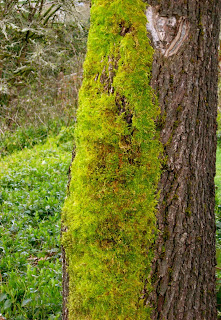 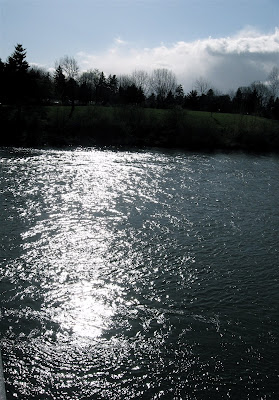 "Sunshine on the water makes me happy..." 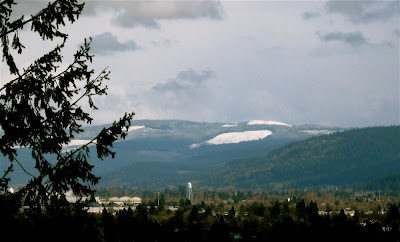 Tame and tiny as it might seem, snow like this in late March in the foothills of our less than 500 feet above-sea-level valley is rare and worth saving in photo form. 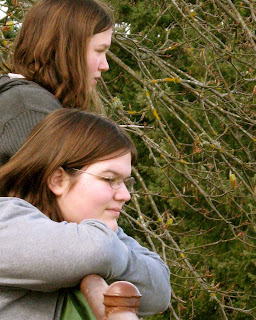 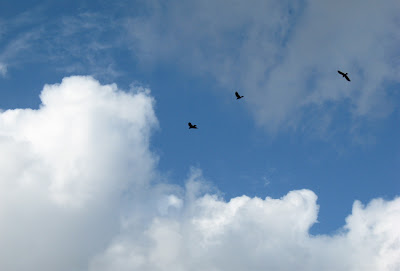 These three birds joined several others for a bit of play - or so it seemed. They swooped and soared catching the updrafts of wind. Envy entered my heart. 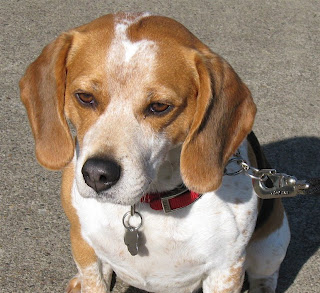 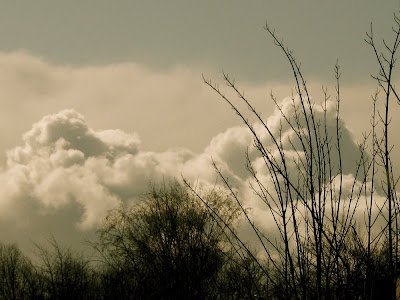 We ended our journey with tiny snowflakes on our windshield and a little tub of Coldstone ice cream in a white bag for later.

Fantastic Cherie, these pictures are so beautiful. Still cold here and too boring for photos. I might have to come and see that beautiful part of the country. My sister in law is going to Portland for some of her cancer treatments. I hope she can enjoy some of that beautiful landscape.

Super photos & beautiful scenery! Needless to say, we no longer get excited by snow this winter, and it's coming down hard right now!:)

BEAUTIFUL!!
Thanks for sharing a preview of spring with me!

Very very nice pictures, Cherie. Thanks for taking advantage of the day and for passing on your points of view.

Sandy, prayers for your sister-in-law. Hopefully the treatments coupled with the fresh air and beauty of Portland will do her much good! Oh, and I don't think it's possible for you to take a photo of your area that I'd find boring. So pretty and unique!

Mike. are you sick of the snow, yet? You'll have a lot of water around once it begins to thaw for good. I look forward to the photos.

Thanks, Tshs, and you're welcome. :D

Thanks, Deanna. You can testify that we live in a beautiful place and that this past week has been quite weird weatherwise.

Thanks, Ann. Not surprised you enjoyed Sammy's picture. You and I love our pups!

(What will I have to do to render you speechless? Photos from Tahiti maybe? :D )

Awesome. Stunning, stunning photos. I think my favorite was the bare tree below the birches. The birch is one of my favorite trees though -

Thanks, Gardenia! I do love birch trees, too. The white bark and the yellow leaves in fall. Breathtaking.

nice, nice, nice... this is beautiful Cherie. Soul food even on a hard computer screen!

"Soul food even on a hard computer screen!" I like that, Cecily.