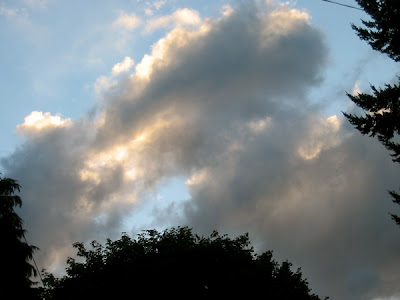 "Years after the Spanish civil war, George Orwell used to tell the tale of his refusal to kill a fascist soldier. Crawling close to the enemy trenches, he caught a fascist in his rifle sights who was holding up his trousers as he ran. Orwell could not pull the trigger. 'I had come here to shoot at 'Fascists'; but a man who is holding up his trousers isn't a 'Fascist', he is visibly a fellow creature.' Would that the world could witness similar humanity and compassion today from those who worship the Creator of humanity and serve the Author of compassion." ~~from Fit Bodies Fat Minds, by Os Guinness
Posted by Cherie at 10:52 AM

Wow, Cherie, you've been busy! Your sidebar looks cool, the picture at the bottom of the page is beautiful, your experience with a mini-tornado is ultra-cool, and you're reading a cool book.

Humanity peers through the horrifying murk of deadly conflict in the sight of a guy trying to keep his pants up. Love it.

Thanks for noticing all my new touches, Deanna! Thanks for the compliments on them, too. You can see I had some fun this morning, huh.

I thought you'd like that quote, and the book from which I gleaned it. ;)

Cherie, a big message in a small post. Thanks!

Thanks, Annie. It really is a big message you are right about that.