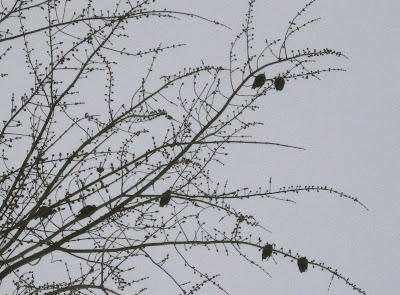 Case in Point
Posted by Cherie at 7:15 PM

You'll make it to 100" then, for sure! Must be a gorgeous, almost surreal landscape which envelopes you, Mike. Beautiful.

Feeling better? I hope so...

Feeling MUCH better. Even went out to a movie with the girls for a change of scenery.

So HAPPY about your news, Pam. Please tell Joe WAY TO GO!

Another beautiful photo, Cherie. Birds in a newly budding tree. The quote is appropriate for the photo and the linked story. So true. I suppose we all have our bully stories and each one is upsetting. Z has his head on straight. His upbringing is no doubt the reason why.

Thanks, Annie. Caroline took that picture yesterday when a bazillion birds descended into our yard and alighted in our trees. Quite fun. Yes, I think you are right about the bullies being so prevalent in the lives of us all, one way or another. Throughout the ages it has been so. The trick is to recognize them and refuse to get caught up in their complexes. Easier said than done when we are quite young. Z has let his experience teach him, it would seem, and found victory over the bully by staying calm under fire. A good example, no?

What a great quote Cherie!
It's a bit of a bittersweet experience when our kids quit leaning on us, but it's also breathtaking to see their wings develop!

I told Z the exact same thing! If he has spazzed out, as Mandy expected, she would have won. Remaining calm and respectful not only foiled Mandy's plans, but earned him the respect of everyone around him.

Z has taught us all a valuable lesson by his most appropriate response to Mandy, the principal, and the cops. I know my daughters are impressed, for they've had their share of bullies, too.

When my kids are bullied I have gut instincts for justice right now and that's often the worst thing to do. Hard to let the kids deal with it on their own, but it's the better way once they reach a certain age. All part of that making leaning unnecessary thing.

Z's ordeal has proven that kids can become empowered to handle things much better than an emotional, justice-seeking mom. (But still ya wanna smack the Mandy's! ;)

The ones I REALLY wanna smack are the bully's parents! What are they thinking?! I know, I know; they don't think, hence the problems. :(

It was sooo hard not to walk Z to class the next day! I knew that it was best for him to handle things without his Mommy tagging along, but that protective instinct still tugged at me.

Yeah, smacking the parents would feel pretty good, too, for a couple of seconds. When we've confronted the parents of the bullies their response is normally that their little darling would never do such a thing and our children must have been lying. Hmmm...explain the bruises and black eyes, explain what it was I saw with my very own eyes? Then it goes to, "Say you're sorry, Junior," and, "He won't do that again." Nope, Not until tomorrow.

When diplomacy didn't work, our boys learned how to jab and hook (self-defense only) and that was the end of the bullies. One time. All it took. We were lucky.

It's kind of funny (in a sad, pitiful way) how bullies run crying to mama when someone returns a few sound blows.

Cassie and Caroline have learned to recognize bullies and just avoid them, or simply let it roll off their backs the way Z did. They have never encountered the physically violent bully-types that ran in our neighborhood when the boys were young. Thank God.

Do you know if anyone has talked to Mandy or did she get off scot-free?

I can go with that, even though I'm obviously not a mother.
---------
I missed your last post, but I had a read through, sorry to hear you had the flu, I hope you're feeling better now- glad to hear you had the best nurses in the world looking after you.
You enjoyed the show, Tom Petty, and the Heartbreakers. Good on you.
Take care;-)

That's usually the reaction we got from bully's parents too. Except for one kid...
Z's worst grade-school bully came from an abusive home. He'd been held back a year, and was a lot bigger than the other kids. The school admin wouldn't believe that he was a problem. When this kid finally got out of hand in class, the teacher sent him to the principal's office, where he attacked the PRINCIPAL! The last time anybody saw him was when he was hauled out of school in handcuffs by the police.

Z would usually fight back when physically bullied, but he was always the one that got caught. Z would end up in in-school suspension, while the bullies got off scot-free.

One day, a group of 3 bullies made the mistake of attacking Z in front of his friends. This time Z had witnesses, but the principal still wouldn't believe that these boys had been bullying Z all along.

Since Mandy is still pulling the same crap she pulled in grade-school, I'm assuming the admin is still oblivious to her tricks. She probably got praised for being alert to a possible threat.

Thanks for the get well wishes, Sean. I'm back to my normal self again - nice! Sad thing, I think Cassie has it now.....so I shall try to be as good a caretaker to her as she was to me.

Tshs: And the principal still didn't believe Z even with witnesses. Disgusting.

Mandy will get hers one day - I feel sorry for her. Someone failed her along the way, methinks.

I've known bullies who've ended up in jail, or dead from picking on the wrong person. And I've known some who've turned from their ways and become wonderful husbands and fathers.

Life remains a mystery and things can change.

In the meantime, I am rooting for Z to have smooth sailing from here on out. = )

I think I should add, Tshs, that I don't know any girl bullies who've gone on to be good wives and moms. Not that there aren't any, it's just that I've known more boy bullies than girls.