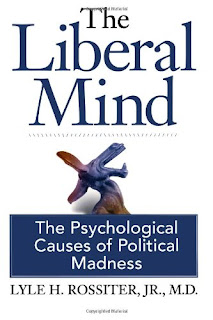 Here is an excerpt from the book, The Liberal Mind, by Lyle H. Rossiter, Jr., MD. Haven't read it, yet. Must say, it's intriguing.

"The Liberal Mind is the first in-depth examination of the major political madness of our time: the radical left’s efforts to regulate the people from cradle to grave. To rescue us from our troubled lives, the liberal agenda recommends denial of personal responsibility, encourages self-pity and other-pity, fosters government dependency, promotes sexual indulgence, rationalizes violence, excuses financial obligation, justifies theft, ignores rudeness, prescribes complaining and blaming, denigrates marriage and the family, legalizes all abortion, defies religious and social tradition, declares inequality unjust, and rebels against the duties of citizenship. Through multiple entitlements to unearned goods, services and social status, the liberal politician promises to ensure everyone’s material welfare, provide for everyone’s healthcare, protect everyone’s self-esteem, correct everyone’s social and political disadvantage, educate every citizen, and eliminate all class distinctions. Radical liberalism thus assaults the foundations of civilized freedom. Given its irrational goals, coercive methods and historical failures, and given its perverse effects on character development, there can be no question of the radical agenda's madness. Only an irrational agenda would advocate a systematic destruction of the foundations on which ordered liberty depends. Only an irrational man would want the state to run his life for him rather than create secure conditions in which he can run his own life. Only an irrational agenda would deliberately undermine the citizen’s growth to competence by having the state adopt him. Only irrational thinking would trade individual liberty for government coercion, sacrificing the pride of self-reliance for welfare dependency. Only a madman would look at a community of free people cooperating by choice and see a society of victims exploited by villains."  ~~From The Liberal Mind; The Psychological Causes of Political Madness by Lyle H. Rossiter, Jr., MD

Great description, I must read.

if i want to know how catholics think, i talk to catholics and not buddhists.

if you are going to be intellectually honest and wish to know how liberals think, you should consult liberals.

if you wish to be told what to think, find someone whose conclusions already support ideas you have and ask them to explain everything to you.

what free choices do you think it's acceptable to take from people just because you feel you're in the right?

rules you make are not rules; they're common sense. rules you don't make are irrational coercion.

self-examine. who tells you what to think?


Flask, you are right that to be fully informed and intellectually honest one must consult a wide variety of sources.

If one wants to know what liberals think one has only to watch PBS, ABC, CBS, NBC, along with the cable news programs (or ANY programs for that matter), or read major newspapers, view Hollywood films, or visit universities, or listen to liberal politicians, or speak with liberal neighbors and friends (of which I have many), study history, and on and on it goes. There is no shortage of current liberal pontification, usually cast in the most positive of lights, scattered upon the ground like easily plucked gold nuggets glistening in the sunshine. In fact, one would have to be either isolated or severely impaired to NOT absorb constant exposure to liberalism.

Seeking out true conservatism, ah, now that takes some digging.

For you to judge my method of educating myself based on my blog posts is astonishingly pompous. Of course I'm going to post views compelling to me, share ideas and sources that I think helpful, useful, or interesting to my readers.

You don't agree with my views so you reactively judge me, accuse me of not thinking for myself, for surely if I actually think for myself - as YOU DO - then I will surely be a liberal.

Methinks Mr. Rossiter must have hit a nerve.